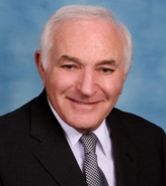 Mark began his career as a real estate investor. In 1974 he turned that avocation into a vocation, and became a commercial investment specialist and shortly thereafter, became a branch manager for the brokerage company that was later acquired by Merrill Lynch.

Through the years, Mark has been honored by his peers with many awards:

- The Florida Gulf Coast Commercial Association of Realtors (FGCAR) 2006 Broker of the Year.

A strong believer in education, Mark has a BS in management from Fairleigh Dickinson University. After acquiring his broker's license, he took the courses necessary to earn the coveted CCIM designation and became a designee in 1982, becoming the 1,482nd designee in the country.

Mark is routinely called upon to speak as a guest lecturer or serve as an expert witness and is often used as a court ordered receiver.

Mark has an uncanny knack for sensing real estate opportunities and has spent years helping clients participate in group investing, which has allowed those who have limited investment dollars to participate in larger real estate projects. Mark specializes in acquisition and disposition of commercial properties, asset management, site selection work, as well as lender property work-outs.